The process of publishing textbooks and its influence on the content

The open discussion had the following format. The speaker has spoken about 4 set of problems that have been found out and the suggestions, the researcher has come up with to improve the overall systems. Following to the presentation, the floor has been given to the audience and the participants have made remarks to contribute the overall discourse.

After a quick overview of the legal regulations for the process, the researcher has presented the process. First, the technical and pricing proposals are being made by the contest participants, and the proposals are going through expertise. When the textbook proposal is getting the guaranteed contracts are being signed with the publishers. Then the schools are making applications and getting the textbooks.The associated problems with the contest are the conflict of interest as sometimes the criteria designers are the same textbook authors and the preliminary agreements within each other. Other related problems are the politicization of the experts, the lack of public information about the assessment and the results of the contests and the applications from the school. Some textbooks such as the “Armenian Church History“ and the “Chess” are being created without contest as the monopolies of the designation of these books are monopolized to certain entities. The suggestions by the researcher are to prohibit the participation of the people who have the role in the decision making of the contest to the textbook’s contest. Also, compulsory declaration of conflict of interest shall be required for the judges of the contest and in case of conflict of interest, the guilty party should be punished. Moreover, there should be created mechanisms to inform the public about the results of the contest and to explain the decisions. Moreover, the School subjects Chess and the Armenian Church History should have similar ways of textbook selection thus there should be contests for the textbooks.

Speaking about the issues of the expertise of the textbooks, the speakers have mentioned these three problems: the lack of the incentives to present a scrutinized criticism to the textbooks, the quality differences among the schools of Yerevan and the regions and the passiveness the teachers have in expressing an opinion about the books on the web. THe researcher has come up with the following suggestions to enhance the system, one of which designing mechanisms for empowering the schools with the tools and incentives to express an 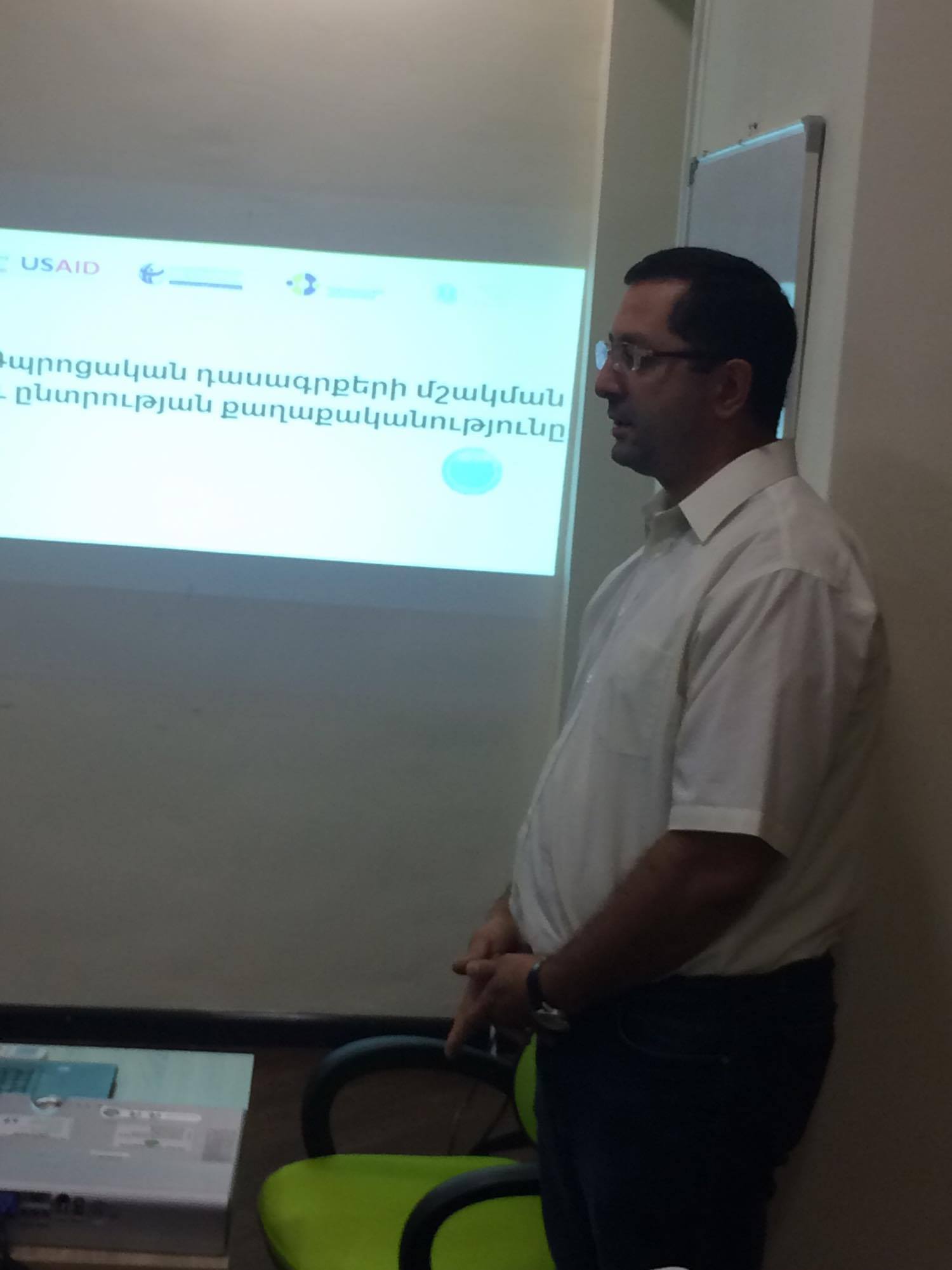 opinion regarding the textbooks by using the opportunities handed by the internet. Moreover, there should be created a feedback channel/social platforms so that the pupils and the parents may share their perspectives. Last but not least, Hovhannes Hovhannisyan suggests creating mechanisms to involve the NGOs and independent international experts in the designation and the implementation of the contest for the textbooks.

The next set of the problems the researcher has found out has been the issues related to the contest of the textbooks. The main issues have been the agreements before the contest between the publishing houses, the agreements between the publishing houses and the people responsible for the contest process before the contest and the unjust selections of the textbooks. The suggestions following the problems associated with contest are numerous and some of them are to research on the publishing houses in each marz and to create mechanisms for make the allocation of the textbooks to schools more transparent. Moreover, H. Hovhannisyan asserts that there is a need to create a mechanism for selection of at least two textbooks for each subject and to hand an opportunity to the schools to consider the options and opt for the textbooks that might be found to be more suitable for the pedagogy by the teachers of particular schools. You may look through the full list of the suggestions in the research appended below.

The suggestions to improve the situation are to revise and redesign the process of gifting free textbooks, to consider and give privileges to the rural (especially the villages near to the border), to frequently monitor the situations in the black market, etc. You may find the full list of the suggestion in the research.

Following the research presentation, the aud 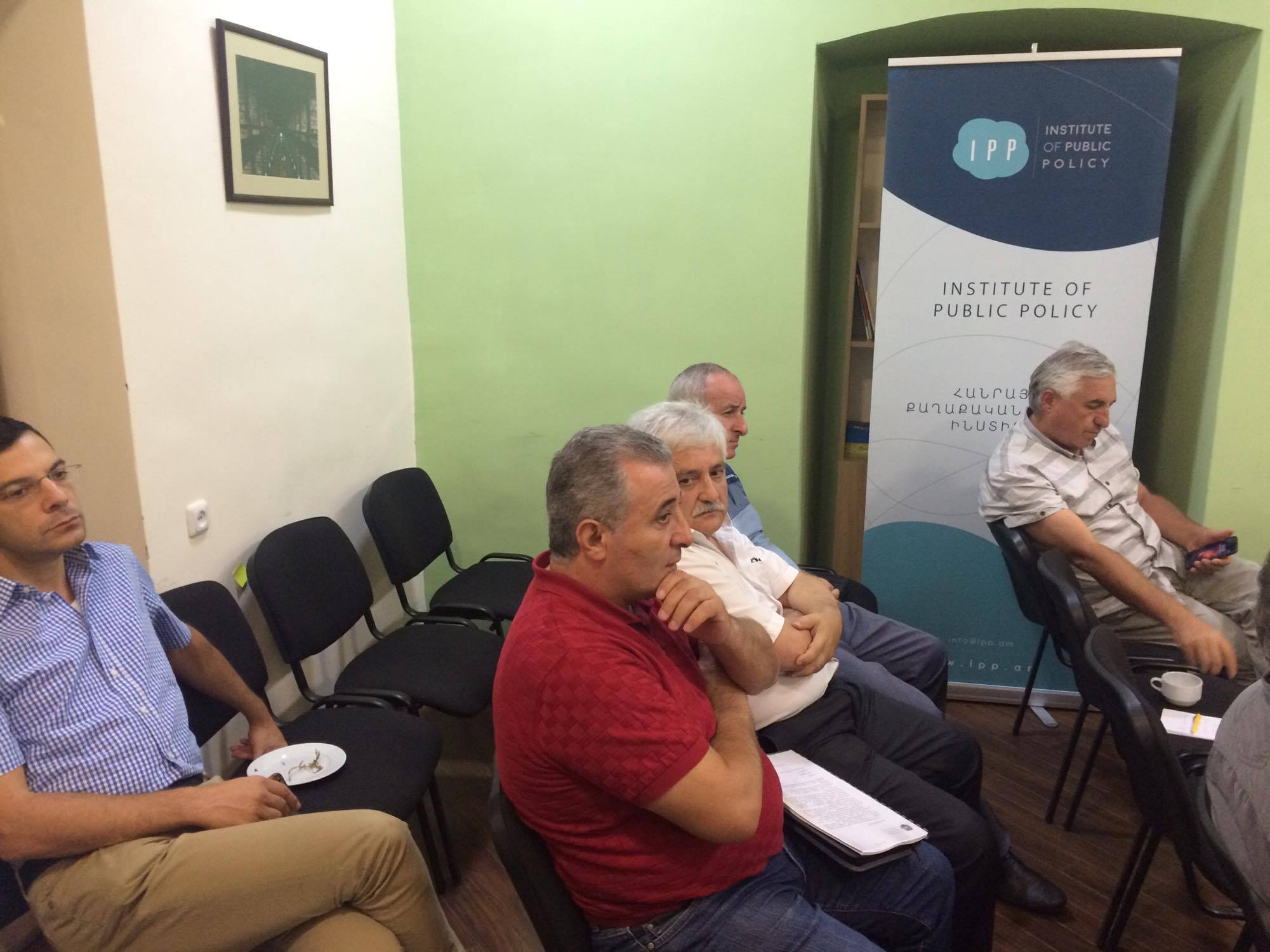 ience started to abruptly discuss the system, the gaps between it and the solutions the society shall think of. Though the participants of the discussion were constantly disrupting the flow of the presentation even during the presentation by making remarks, after the presentation the floor has been officially given to the audience. The representatives of the ministry have expressed their gratitude and told that the ministry knew about the problems and the research has been the justification of some of the reforms that are going to be implemented.

On the other hand, some of the audience have asserted that the system is ill and it necessary not to change anything in the system but the whole system. The foundational aspect of the new system is that it should not have any textbook because the process of the textbook is “beyond saving”. It is necessary to create tools to empower the school teachers to select different teaching materials from a big collection of materials. The people who were for this argument have mentioned that the textbooks are tools for a censorship and they deteriorate the opportunity for the pupils to have second thoughts and alternative thinking. Moreover, the textbooks are restraining chains for the teachers and to liberate the teachers, it is necessary to give the teachers freedom. As supporting examples the Greece has been brought up as an instance which has designed a system where every textbook may become a book if it is getting approved by a special committee.